Pynelogs was built by Robert Randolph Bruce in 1914 to serve as a home for himself and his wife, Lady Elizabeth Northcott. By 1901 he was shipping ore out of Paradise Mine, a promising high elevation site up Toby Creek. For over a decade the mine was one of the principal employers in the valley. In 1887, he founded the town of Peterborough, now named Wilmer.

By 1909 Bruce was involved in another major business venture, the “Columbia Valley Irrigated Fruit Lands Co. Ltd.,” which bought land at the north end of Lake Windermere. This property was originally known as Copper City, then Canterbury, and by 1913, Invermere. The company’s aim was to draw new settlers to the “rich, productive fruit lands” above Wilmer. Brochures showed pictures of a land with luscious apples on plentiful orchard trees (the apples were tied on with string!) and people lazing away the sunny afternoons in sailboats in Lake Windermere. In early 1912, Bruce went back to Scotland, and returned to the valley in April with a party of settlers ready for their new-found Utopia. Needless to say, life was not quite as laid back as Bruce lead them to believe;  however, most of the settlers stayed on in the valley and many residents today are their descendants.

In 1913 Bruce bought the land in a bay at the north end of the lake and went to work designing a house that would outdo all the others in the valley. It would be commodious and modern with steam heat, indoor plumbing, and electric lights. He left the finished plans with a builder and went home to Scotland for the winter. By Christmas word had arrived back to the Windermere Valley that Bruce was engaged to Lady Elizabeth Northcott, daughter of the Earl and Countess of Iddesleigh. The couple were married in a small church on her parents’ estate at Upton Pynes in England on January 6, 1914 and they honeymooned in Algeria for the winter.

When they arrived in the valley on May 14, 1914, construction on the new home had not yet started. In August of 1914, they began working on “Pynelogs,” so called after Lady Elizabeth’s ancestral home. To better supervise the construction, Bruce bought a houseboat, the Isabella, and anchored it in the bay. Sadly, a year later, Lady Elizabeth took ill suddenly and on September 27, 1915, at 10:30 in the morning, she died of what we now assume was a burst appendix. There were no doctors in the valley to attend to her as they had all left to help in the war. Her body was laid to rest in the gardens of Pynelogs after the funeral on October 2. The headstone and memorial still stand by the lake in front of the Pynelogs building. 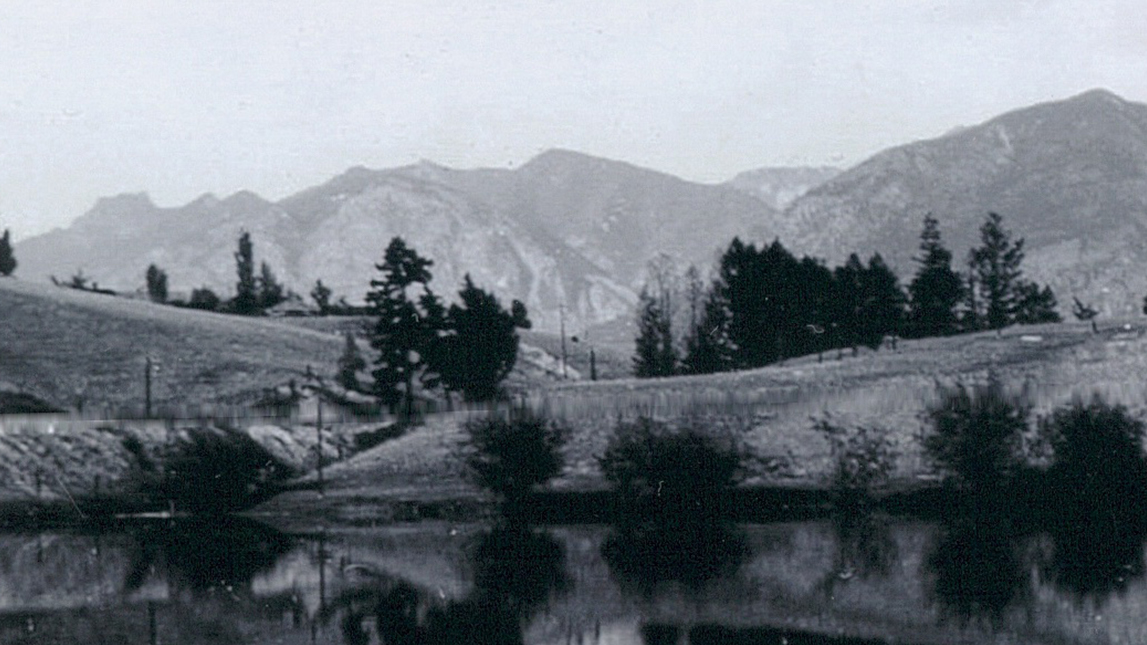 Robert Randolph Bruce remained in the valley after his wife’s death until 1926, when he was appointed Lieutenant Governor of BC. He served in that post until 1931. During this time he was able to make only infrequent visits to Pynelogs. By 1932 it seemed unlikely he would ever again take up permanent residence in the valley; he had married Edith Badgely Molson of Montréal.

The District of Invermere approached Bruce in late 1936 to ask if he would donate Pynelogs to be used as a hospital. He agreed, paid for renovations, and renamed the building the Lady Elizabeth Bruce Memorial Hospital. It was officially opened on Coronation Day in May of 1937. He also turned over certain bonds and shares to be used for the permanent upkeep of the grounds with special reference to the grave of the Lady Elizabeth. Meanwhile, Bruce had been appointed Canadian Minister to Japan as Canada’s “envoy extraordinary and minister plenipotentiary.” By 1942, Mr. and Mrs. Bruce were back in Montréal. His health had deteriorated, and at 81 years old, Robert Randolph Bruce died.

In 1958 the Windermere District Social Services Society was formed to study the best use of the old hospital. Renovations for a home for the elderly were started in October 1960, and the home opened in January 1961 with five guests. Soon after, more space was needed and in due course the government built a larger facility for senior retirees. Pynelogs was again vacant for some time.  Later, the building was used as a home for mentally handicapped adults. Before long, this group also outgrew the space and Pynelogs was desperately in need of renovations. 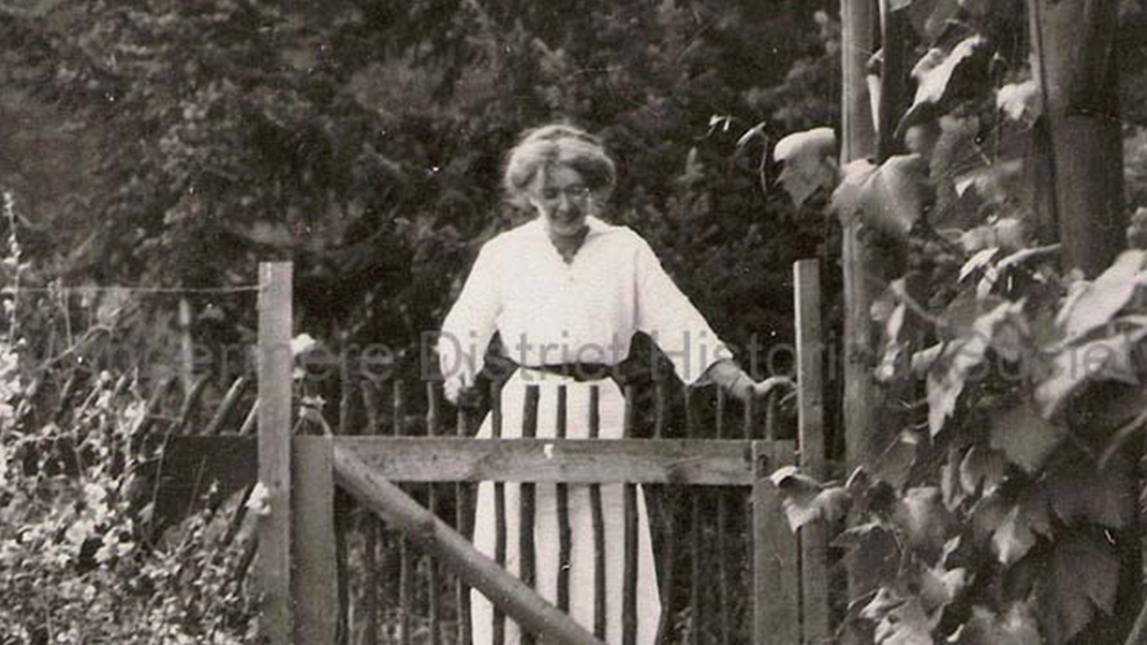 The Columbia Valley Arts Council, a volunteer, non-profit organization devoted to promoting the arts in the Columbia Valley, recognized Pynelogs’ potential as a cultural centre and applied to the village council for a lease. The town agreed, and after more extensive renovations, the new Cultural Centre opened in May of 1990. Since then, Pynelogs has been the regional venue and destination for all things Cultural in the Columbia Valley. Pynelogs is now open all year round featuring art from local artists, offering art workshops, hosting live music and special events, providing a home to the Pynelogs Café, and space for private rentals.

Pynelogs is located in a truly unique setting. This impressive historical log building is situated in a lush park on the edge of Lake Windermere in Invermere. The main entrance, at the rear of the building, is adjacent to a large pond, Dorothy Lake, featuring a fountain which shoots water 60-70 feet into the air. The grounds contain a Botanical Heritage garden featuring “old fashioned” vegetables and flowers from the era of the late 19th and early 20th centuries. In addition, the District plants beautiful annual gardens and looks after the landscaping of the grounds. The community Greenway’s Trail commences at Pynelogs.

The Pynelogs building is 100 years old and has undergone a number of internal modifications through its history as a private residence, hospital, group home, and its current function as the regional centre for arts and culture. Pynelogs is a truly unique facility and a heritage site for the residents of the Columbia Valley. Its historic significance in the development of this area and its place in the history of British Columbia warrant maintaining this legacy in an appropriate manner. Accordingly, CV Arts and the District of Invermere spent over $530,000 on a major restoration and renovation in 2004-2005 to ensure the longevity of this community treasure. Pynelogs is now essentially a 21st building inside a Victorian shell.

Art is for Everyone. Get all the info you need for upcoming events, exhibitions, and performances.